This is the traditional central plaza of the city. As in many of the first original colonial cities of the New World, this plaza is the centre from where the rest of the streets of the city radiate out, like a checkered board. It has on it, the grand Cathedral; seat of the Archbishop, as well as the Government Palace; the offices of the governor of the State of Oaxaca. It's construction dates back to 1529 and since then it has been the focal point of the city as it is today. Totally closed to traffic, it's very pleasant to walk along pedestrian walkways and sit by the cafes to watch the world go by.


Musical performances take place every evening in the central bandstand, with marimbas (xylophones) and brass bands, alternating every other evening. Also, the grand "Sunday at Noon" concert with the 70-piece Oaxaca State brass band, under the shade of the trees. It's also where all the parades come through, such as the Guelaguetza and the Christmas floats, as well as where all the main events are set up such as the "Grito" of Independence in September and the great Radish Festival on December 23rd.


Daily, it's the plaza where most locals meet, walk by on their way to the market, look for fine dining, have drinks in the sidewalk cafes or for kids to throw balloons up in the air and enjoy our great weather under the shade of large Indian Laurel trees. 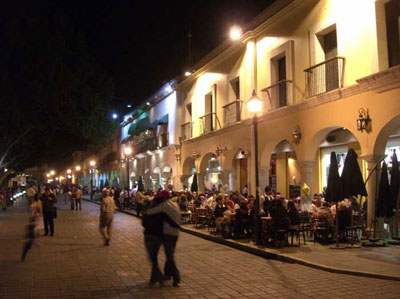 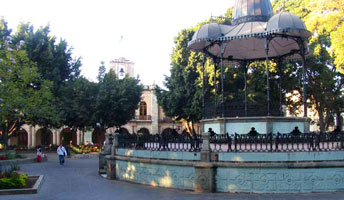